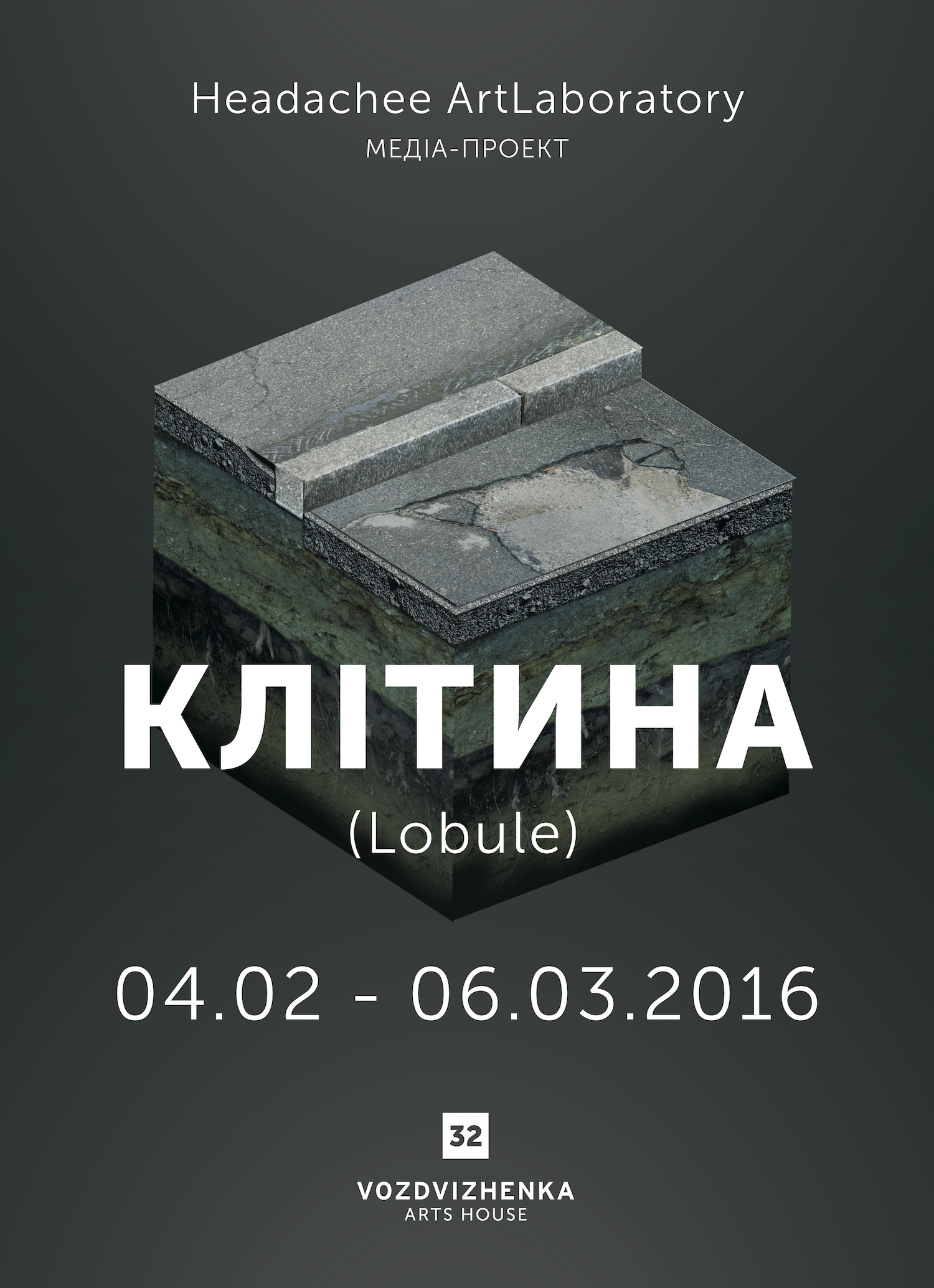 The earth, herbarium and the sprouting grain are the biological metaphors selected by the artist of the Headache ArtLaboratory for working with the themes of media culture, cultural memory and the Ukrainian society traumas, acquired over the last few years due to the new geopolitical conditions. The form of representation of the ‘LOBULE’ project installations partly resemble a cross between a pseudo-scientific collection of ‘scarecrows’ and ‘skeletons’ of Jan Švankmajer and the dystopian artifacts of the cyberpunk culture: mapping, which simulates the soil layers; computer cables in the herbarium boxes and videoы of the germinating grain, accompanied by a voice-over narration about the process of the sprouting plant and sleep disorders, uttered by a speech synthesizer.

In its essence, the earth is the soil which together with the humus is an environment for the emergence of a new life. Symbolic humus in the project of Headachee ArtLaboratory – is a number of blurred, glitchy video images of political and cultural events taking place in Ukraine between the two revolutions of 1917 and 2014.

In fact, herbarium is a carefully stored by a botanist piece of material which in the natural conditions would become humus, a nutrient environment for germination of new and young biological forms. In this case, the herbarium becomes an important artifact for the cultural memory. The sample, which is selected for being exhibited is usually the best of its kind, a vector of precisely those features and qualities by which the everymen eyes got used to determine the universal (biological /cultural) codes.

And in fact, each sprouting grain in the soil appears in a conducive situation which leads to the formation of a split consciousness. Warmed by the energy of disintegrating humus, unwittingly it tends to become an exemplary choice material for the herbarium and focuses on the behavioral model thoroughly and carefully cultivated by a propaganda machine. The discrepancy between the mass media images and reality becomes the first order paradox, which the sprouting grain has to face. Then it is followed by a no less paradoxical situation: growing through the humus and soil (traditional/post-soviet/post-colonial society), the grain seeks to appear on the surface of a free society, where the process of photosynthesis provides a democratic regime. Is the sprouting grain in the genesis of the active search and construction of a national identity and consciousness able to reconstruct its narrative not only from the perspective of the victim, but also from the perspective of a responsible figure? On the biological stage of ‘establishment’, the grain has to accept the fact the democratic model of Western society is not only a high quality comfort zone and the democracy`s fellow concomitant neo-liberal model of economic development; but it is also respect to the language, ethnic groups, places of their residence, skin color, eye shapes, gender, confessional, religious and sexual orientations, political beliefs, the national tragedies of the ‘Other/Outsider’, on which the idea of ​​any democracy is based.

Let’s leave aside the criticism and evaluation of the Western model of democracy. Not the paradox involved in this case is drawing my attention, as the recipient of the artistic act but the paradox(es) which were pointed out by Boris Groys in his essay "The Communist postscript" (2005), written almost twenty years after his landmark work for the 1980s "Gesamtkunstwerk Stalin"(1987) being, in fact the methodology for its perusal. For Groys, the Paradox is the main form of thinking for the (post-)soviet man, who professes dialectical materialism and receives an orgasm from the contradictory absurdity of the dominant ideology.