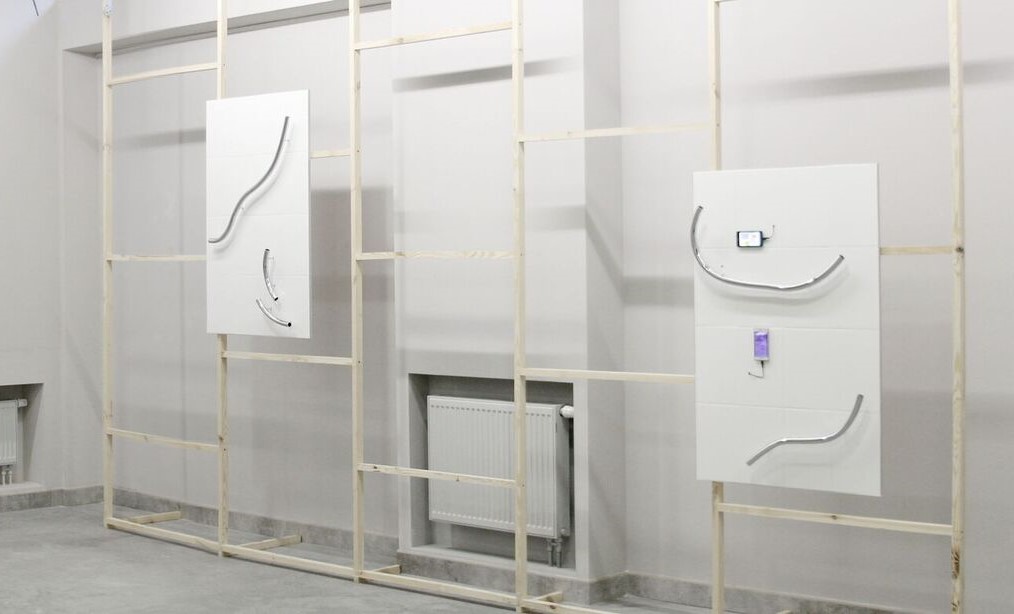 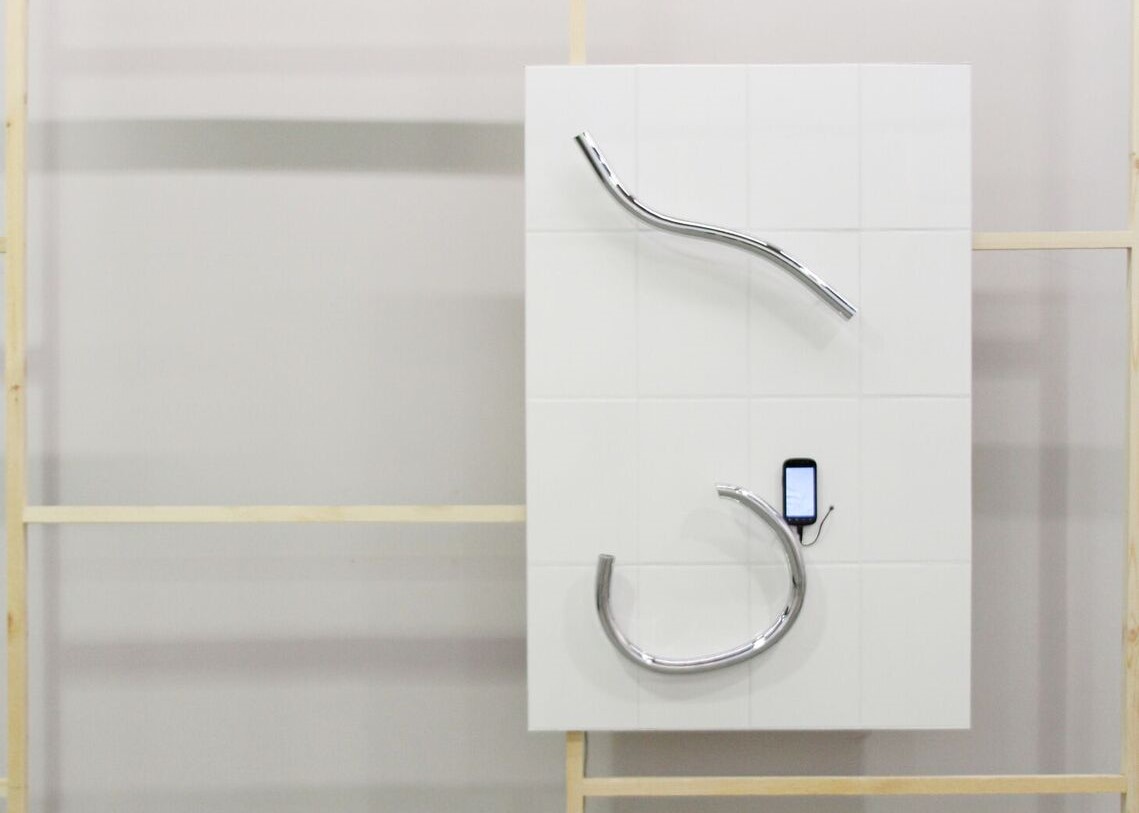 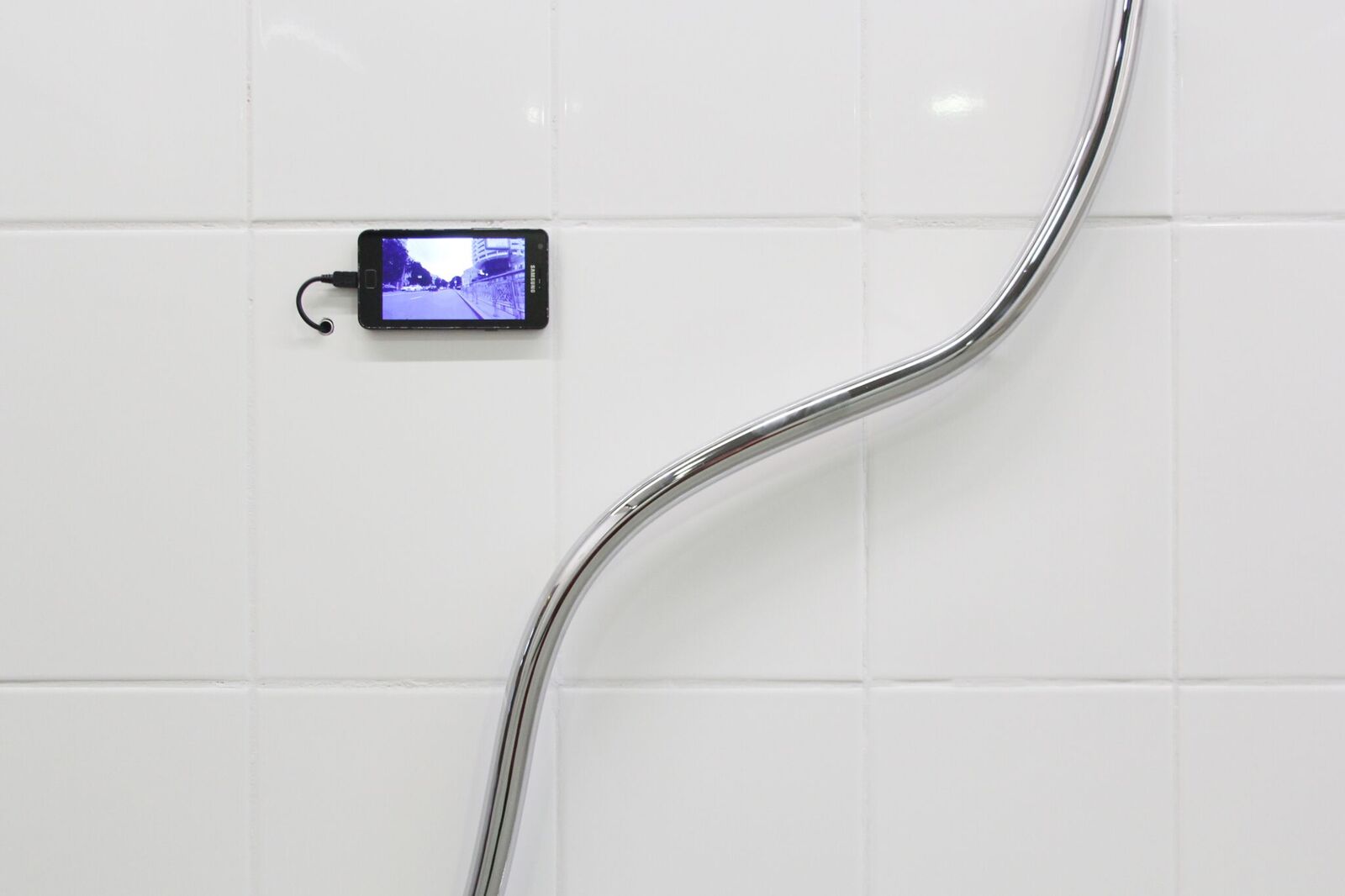 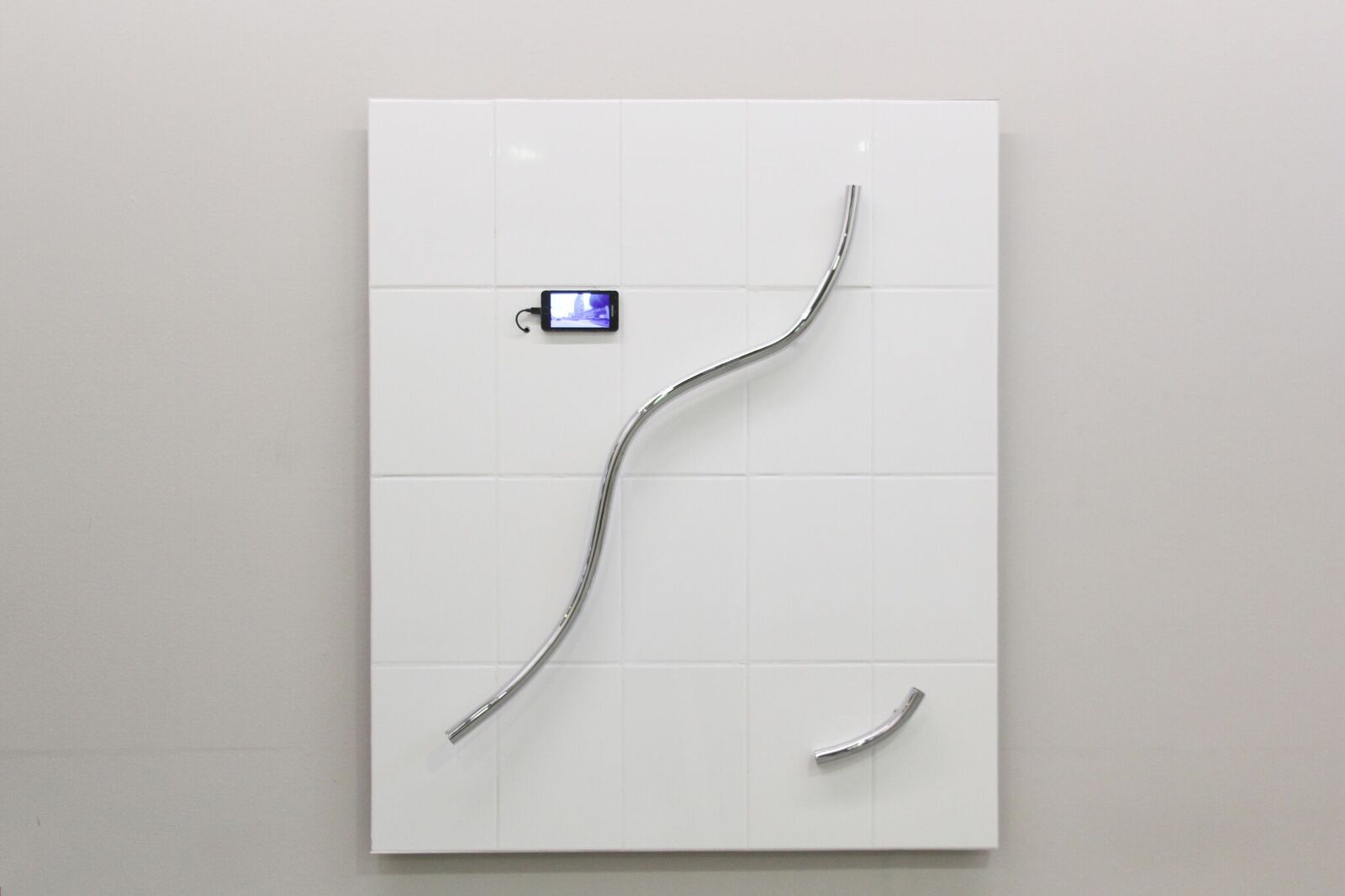 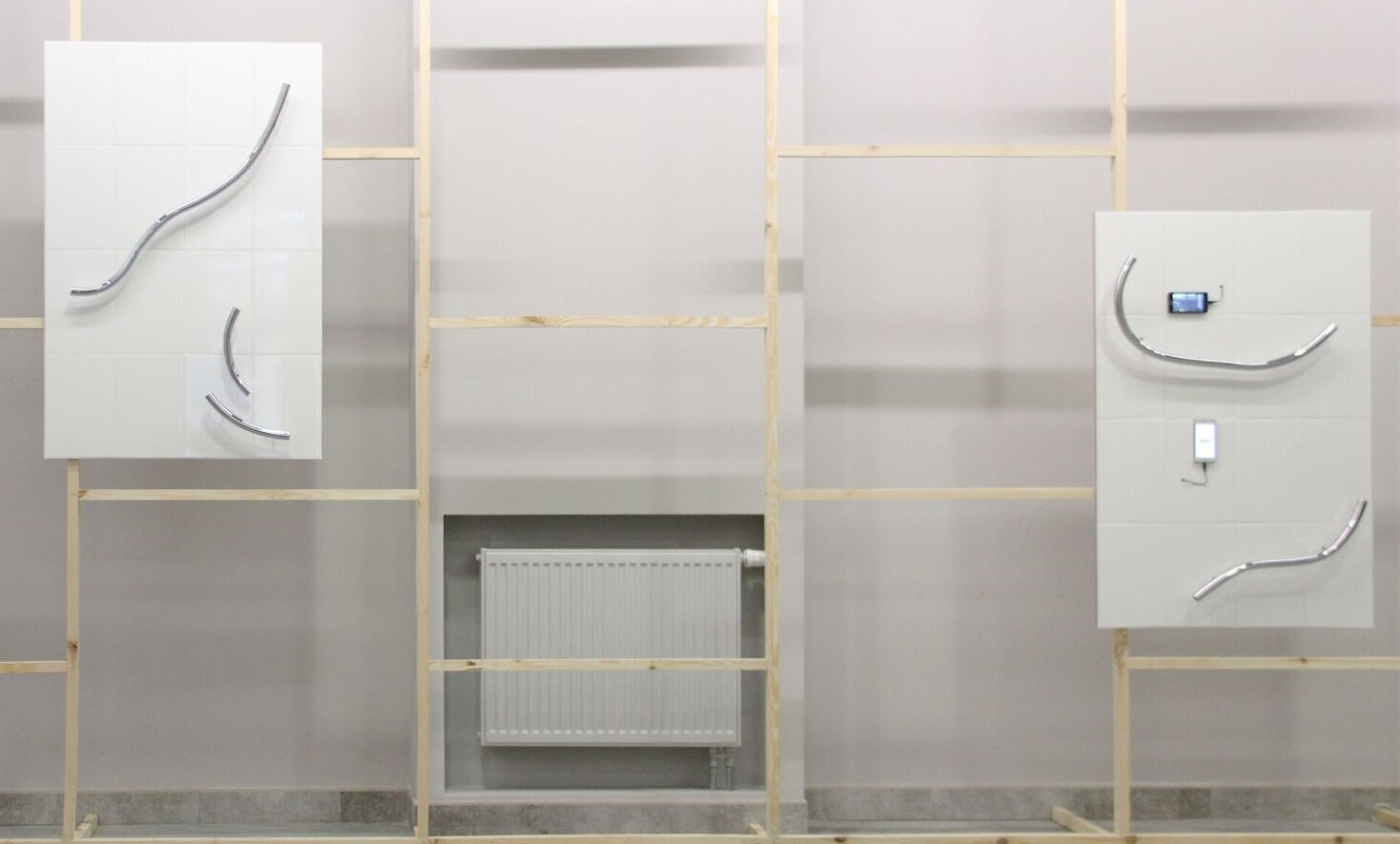 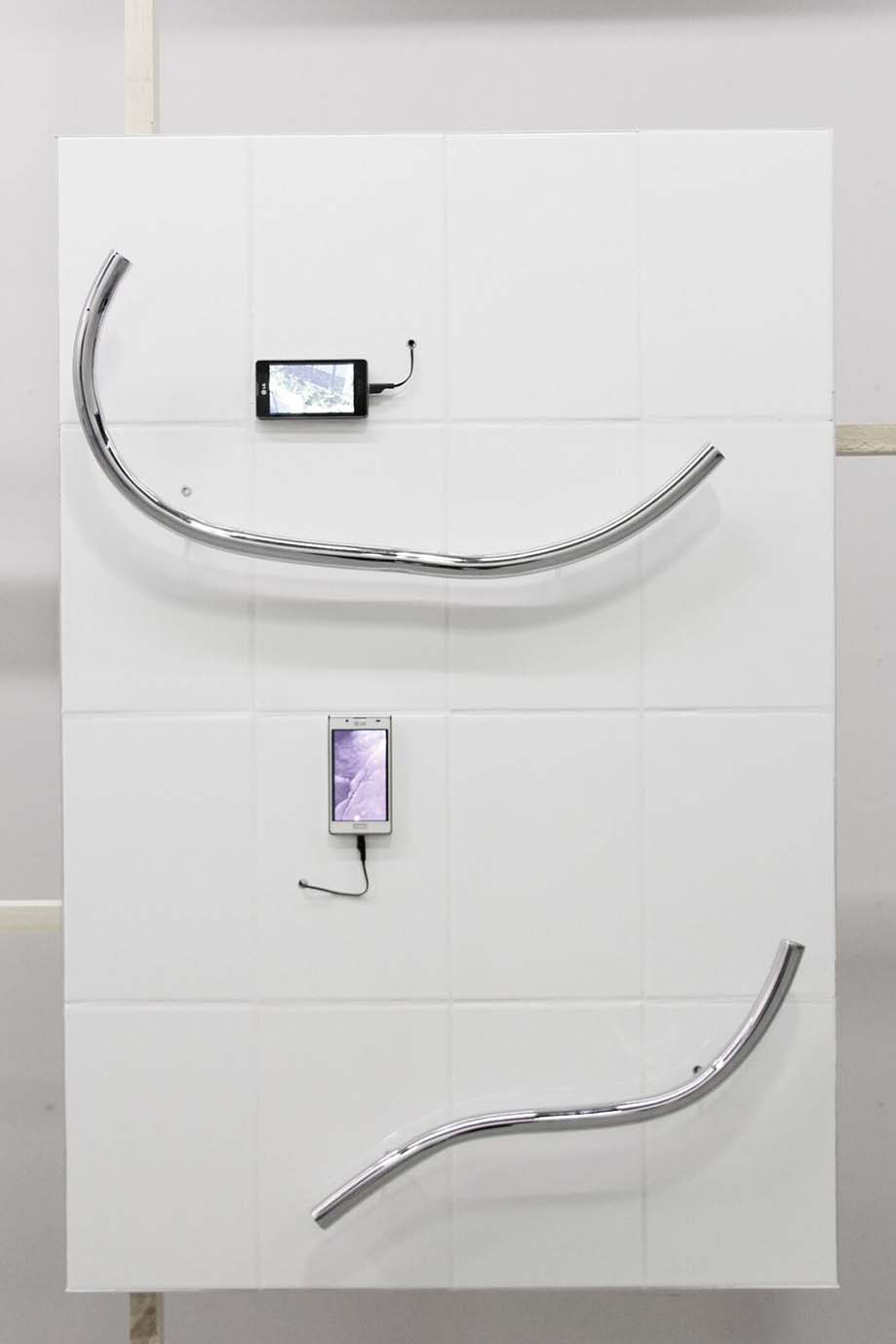 In his work “Synthetic landscape”, Mitya Churikov reflects on the problem of environmental concerns and topics of artificial, man-made urban landscape, focusing on the materials of which it is constructed. At his point of view, this is a cut of surfaces which one confronts, touches and uses every without noticing. However, humans unconsciously form the image of a modern city and significantly impact our perception of public space. References to landscape architecture and modern design which were observed by the artist in the facades of buildings, offices and streets were then reinterpreted by him in sculptures, objects and graphical content works.

Particularly, Churikov addresses the problem related to the impact of a human on the environment and captures changes that occur in the urban space.

Mitya Churikov: “In my work I have used various objects from the materials that we face every day: tiled stoves and chromed metal tubes. The smartphones are fixed to these objects. They became a part of us and thus have a huge impact on our perception of reality. That is to say, they became maps and navigators, through which we perceive reality which algorithms lead us on a route that we may not have selected.

Videos which can be seen on the screens of smartphones have been filmed in recent years, mainly during travelling. In these videos I use the 3D material from Google or rendering, based on the photographs – the photogrammetry. In these videos there is no hierarchy of time or geographical classification. The urban landscape of different cities turns into one-piece. This is not a reflection on the facts or political events, this is a portrait of materials` surfaces that make up our environment, some cultural layer, which in the future will tell as much about us as texts and films that we create. In this case, I consider the material as something existent, as a fully autonomous object that prevails in invisible connections and bonds, consequently becoming a key element of digital “Storytelling”. The very same landscape I examine as a fragile system that has no permanent form, which tends to modify, depending on its location. It is literally about the urban culture, namely a cultural phenomenon that emerged in the urban environment and it owes its legitimation only to him.

In 2006 he moved to Berlin on the permanent basis

Synthetic Landscape from Mitec on Vimeo.